The highly explosive 1st Negros Fighting Arts Exposition was successfully held by ABS-CBN, the nation’s largest broadcasting network, in cooperation with the Negros Fighting Arts Unlimited and Robinson’s Place Bacolod last July 8, 2008 at the Fountain Area, Robinson’s Place Bacolod, Bacolod City as part of the ABS-CBN Kapamilya Sinadya in celebration of the 20th Anniversary of its Bacolod station.

Arts showcased included Filipino, Chinese, Korean, Japanese, Thai, Indonesian, Brazilian, and eclectic forms of Fightign Arts. The Filipino Martial Arts (FMA) was the most represented, with 6 organizations and 3 others with Filipino elements.

Negros Fighting Arts Unlimited is the name given by the organizers to the different member organizations of the Negros Occidental Baston Federation (NOBF) of Atty. Col. Grandmaster Marcelo “Pope” C. Jalandoon, Ph.D., and Intercontinental Federation of Filipino Martial Arts Schools (IFFMAS) under President Grandmaster Elmer V. Montoyo as well as independent martial arts groups who participated in the ABS-CBN presentation.

The event was originally scheduled for June 25, 2008 but had to be postponed to July 8, 2008 to give way to the ABS CBN Sagip Kapamilya to extend relief assistance to victim families of Bagyo Frank in Iloilo, Bacolod, General Santos, Roxas, Zamboanga and Metro Manila. Nevertheless, the event was a huge success with the safety mats being provided by the Province of Negros Occidental under Hon. Gov. Isidro Zayco and the City of Talisay under Hon. Mayor Eric Saratan.

Each demonstrating team had their own theme music to set the mood for the non-stop fast-paced action. Among those played were Eye of the Tiger, Final Countdown, Moment of Truth, Once Upon A Time in China, and Samurai X.

The event started off with a very short but very explosive demonstration by Founder/Master Ricardo P. Filipinas of Sacred Ki Art of Filipino Footfighting (SKAFF). Master Filipinas, wearing a black gi with a red/white belt for his 6th Degree, raised his right leg and had his assistant yellow belt Stephen Jay D. Yanson hit his upraised leg with a 2 x 2 piece of wood. 2 pieces of wood were successfully broken with no injuries to the shin. Master Filipinas was representing Sikaran, the Filipino art of footfighting founded by Grandmaster Meliton Geronimo in Baras, Rizal.

Grandmaster Danilo “Danny” Cardinal led members of the KaliSilat Arnis Association (KAA) in their performance of their of KaliSilat, a style of Arnis founded by Grandmaster Jonathan “Jon” Bais of Sagay. GM Cardinal did an Anyo (form), which combined the basic attacks and defense of Arnis. The KAA Demo Team composed of Master Guilberto Dajao, Joselito Clemen, and Climaco Lumanog, showed the choreographed sequencing of various techniques into the duelo and the application of techniques in actual labanan competition. 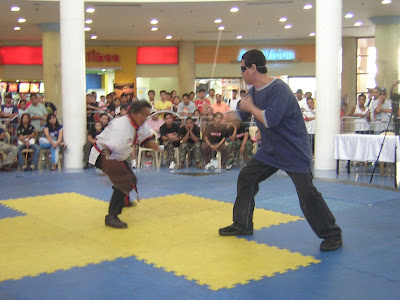