Tai Chi & Dance: Harmony in Motion Part I: The Constant Flux That Changes Martial Arts by: James U. Sy Jr. 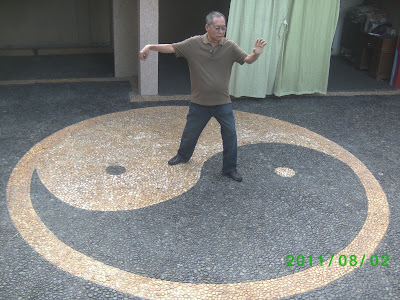 
Martial arts had always been an important part of Asian life and culture since the ancient times. Fighting skills were a necessity to survive against conquest and pillage by neighboring kingdoms and in later times, European colonialists. The martial arts were used to strengthen the clan, tribe, kingdom, or empire regardless of in what part of Asia it was located. Various warrior classes, such as the errant knights of China, the Samurai of Japan, the Hwarang of Korea, the Ksathriya of India, and the Bagani of the Manobos in the Philippines among others, were developed.

However, no martial art, no matter how evolved it is, can withstand the power behind gunpowder. The incursion of western powers, such as the Spaniards, Portuguese, British, Dutch, and Americans, into Asian commerce and political affairs cost Asians countless lives in defense of their lands. Over time the martial arts declined in popularity as its most skilled exponents perished in these wars for freedom, the imperialists banned the arts, firearms took center stage in the battlefields, and industrialization and modernization shaped a new society.

Among the martial arts systems caught in these changing times was Tai Chi Chuan “Grand Ultimate Fist (Mandarin).” There are legendary accounts of the art’s roots but what is historically verifiable is that it was first recorded in the Chen Village in China. It was here that Yang Lu-Chan learned Chen Style and later evolved it into Yang Style. Yang made modifications to the art he learned. The old Chen style had lower stances due to the fact that warriors wore armor in earlier times. But in Yang’s time, this was no longer the case so he raised the stances and made other pertinent revisions.

Fast forward to the 21st Century, a time which is no longer plagued by anarchy and chaos, at least in a general sense. Tai Chi Chuan is now practiced by millions for the purpose of health and longevity. While there are still a few who teach the martial applications of the art, the health aspects of Tai Chi took center stage to combat the more pressing concerns of stress and illness in the more fast paced modern life. Various studies, many of which were conducted in modern day China, had confirmed the health benefits of Tai Chi.

In Bacolod, the oldest group practicing the art is the Tai Chi Circle of Bacolod (TCCB), which was founded way back in July 17, 2000. While there were ethnic Chinese residing in Negros who practiced Tai Chi in the earlier days, they did not teach and kept the art to themselves and their families. There were early teachers but there’s no cohesive group to talk of. TCCB was nowhere in public view until this writer first wrote about the group around the middle of the first decades of the 2000’s. Their patriarch, Peter John Lloren Yap Sifu, at first refused an interview because they were not a commercial group. The group shared Tai Chi for those interested for free; that was the main reason why this writer endeavored to introduce them to the greater public.

Yap Sifu’s journey to Tai Chi started late in life. All he wanted was a cure for the aches he amassed from years of hard labor during his younger days. Tai Chi helped him cope with this problem. Through TCCB Yap Sifu wanted to share this gift from the Chinese civilization and help its members live more comfortable and productive lives inspite of existing medical conditions. Yap Sifu knows the martial applications of Tai Chi but he believes maintenance of one’s health and well being is the priority of training, at least for his group, because most members are civilians who wouldn’t be faced with conflict most of their lives.

Tai Chi Chuan, as taught by Yap Sifu, is dedicated to the focused study of the teachings of the late Grandmaster Chen Man-Ching. Yap Sifu teaches in a scientific manner rather in cryptic and mystical jargon. For instance, he emphasizes proper musculo-skeletal alignment during movements, which is very essential in maintaining the integrity of the joints and avoid tears to the muscles, ligaments, and tendons. Breathing is natural and not forced or artificial. Speaking in such understandable terms enables practitioners to easily comprehend the essence of what they are taught and thereby progress significantly in the art in a less period of time.

In several conversations with Yap Sifu, this writer discovered that he has tapped another application of Tai Chi Chuan, something unheard of, at least here in Bacolod, and something that some have criticized to be out of bounds. This is the application of Tai Chi principles and movements to dance. This we will discuss more in the second part of this article.
Posted by Conceptual Warrior at 8:21 PM