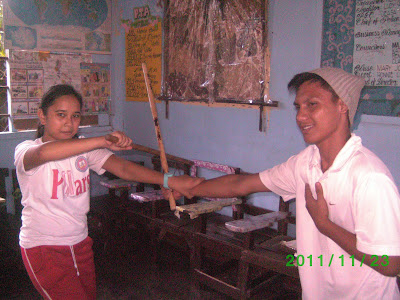 Joshelle Rianne C. Gubaton and Wilson D. Espejo of the OLPA Arnis Team crossing sticks during one of the seminars held at the Our Lady of Pillar Academy (OLPA), Brgy. Ma-ao, Bago City (CMAS Photo). 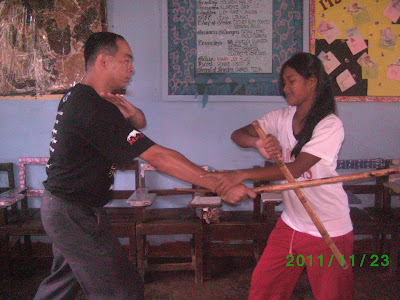 The Our Lady of Pillar Academy (OLPA) Arnis Team was crowned champion in the boys labanan division with 5 gold medals in the Area Meet held last October 13-15, 2011 at the La Consolacion School Isabela Negros Occidental, Inc. in the Municipality of Isabela. The team also took three gold medals in the girls labanan division and a gold in the girls anyo category. Vanessa G, Torrecarion gave the team its lone gold medal by stringing together the basic striking patterns taught by Grandmaster Sabas T. Gubaton, Chief Instructor of the Oido de Caburata Arnis Group (ODCA). The team’s success gave them the opportunity to compete at the provincial level.

Ignacio expressed the excitement and anxiety her team feels, “We know there is better competition in the provincial level and more experience at that. Our team is a neophyte, only assembled this year. We need to train harder and we need all the support we can get.” The OLPA Arnis Team made their debut this year at the Division Meet. The Area Meet was only their second outing.

The series of seminars focused on the anyo event, which has more medal slots that the individual labanan event. For each seminar, Sy taught two sets of any a it is the required number of performances for each competitor for each category as set by the Department of Education (DepEd). Sy specifically designed the four forms for use by the OLPA Arnis Team for competition. The forms were a synthesis of sword-based movements from Conceptual Arnis, Yasay Sable, Lapu-Lapu Viñas Arnis, and Guarra Style Modern Arnis. Sy also gave pointers on how to go perform based on the set criterion and made the players understand the rules to avoid penalties in their scores.

Another workshop, this time focused on labanan, is scheduled for December 6, 2011. Master Ferdinand “Bobot” Y. Gayoles of Yasay Sable and Grandmaster Estanislao “Eslao” T. Guarra of Guarra Style Modern Arnis gave their blessings to teach segments of their systems for the labanan division.

The Our Lady of Pillar Academy (OLPA) Arnis Team is supported by Director Rev. Fr. Samuel E. Balboa and Principal Candelaria Balbao.
Posted by Conceptual Warrior at 1:29 AM