P/Sgt. (Ret.) Grandmaster Estanislao “Eslao” Terante Guarra, one of the few remaining active old time Eskrimadors in Negros Occidental, celebrated his 75th birthday together with his family and friends last May 19, 2008 at the Guarra Residence in Lag-asan, Bago City . About 200 well wishers came and participated in the festivities, which was held in time with the annual Lag-asan fiesta. 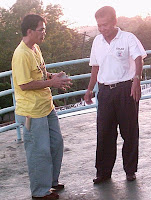 Eslao Guarra was born to Grandmaster Cornelio “Kune” Toledo Guarra and Luisa T. Terante on May 19, 1933 in Bago City . He was the 7th of 13 siblings composed of 7 boys and 6 girls. All the Guarra children were trained in their father’s and his group’s fighting arts locally known as Herada Redoble or Espada y Daga. The young Eslao started his training in the 12 methodos of Espada y Daga from his father as well as his 7 friends.

On February 20, 1956, Guarra, then 22, started his 32 years service in the Bago City Integrated National Police (INP). Guarra had served as a training staff of the Bago City Police Station, having trained auxiliary police in all barangays of Bago City . Within his illustrious career he had received many awards and commendations.

Master Guarra had served as Security Officer and ROTC Tactical Officer at the University of Negros Occidental-Recoletos (UNO-R). He started teaching Arnis publicly in around 1970. He retired as a multi-decorated police sergeant on May 19, 1998 and by that time had already taught arnis to more than 10,000 barangay tanods, police officers, security guards, and civilians.

GM Guarra emphasizes in his school that Arnis is not meant to bully fellow human beings and to boast but must serve as a tool of personal defense of life and honor. He also warns students of drinking while training and indulging in prohibited drugs.

GM Guarra’s personal history and style was first put to writing by Rev. Fr. Jerson Balitor, then Parish Priest of Ma-ao, Bago City , himself a researcher and accomplished expert of the martial arts. GM Guarra was first introduced extensively to the general public by Negros’ premier martial arts historian/writer James U. Sy Jr., Founder of Conceptual Martial Arts Society (CMAS), Inc., through his various works starting with the 3-part series “The Best Arnisadors of Negros: GM Estanislao “Eslao” T. Guarra” which was published on the May 16-22, 2004 issue of Negros Weekly and culminating with the international feature “Guarra Style Modern Arnis: Modern Style Rooted in Tradition” published in the Vol. 10 No. 4 issue (2006) of the Rapid Journal, the one and only and longest running martial arts publication in the Philippines.
Posted by 69buccaneer at 6:03 PM