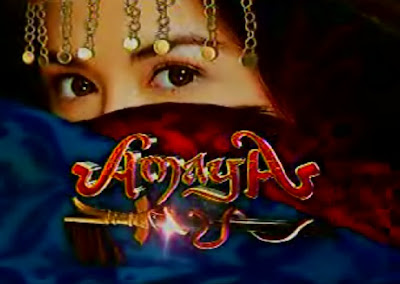 GMA’s new epic teleserye Amaya is a two-edged sword. It has its own merits and shortcomings and as to be expected, it received mixed reviews of both praises and criticisms. This commentary is by no means contributory to the raging network wars on cyberspace. Instead it is meant to give credit to what this teleserye means to the awareness of certain aspects of Philippine culture and at the same time, point out certain irregularities in the use, or misuse, of certain cultural and/or historical data in its storyline.

What is most commendable about the project is its effort to present the story based on cultural and historical researched data, something which is unheard of before, or at least not of this caliber. Amaya is both a milestone and a big risk for GMA. As far as is recorded and known, and as GMA advertised it, the teleserye is the first ever on Philippine TV to be explicitly based on pre-Hispanic Philippine history and culture. This makes it stand out immediate among its peer programs. Of course, the saleable programs are those centered on love stories and emotions, as Filipinos are fond of this formula as Korean telenovelas would show us. In essence, GMA is taking a big step by making something that has not been tried and done before. And it seems, they did well. The viewers just love Amaya.

As a native Ilonggo living in Region 6, I am glad and feel honored that the project Amaya took pains in presenting the rich pre-Hispanic culture of Panay, from which majority of the ancestors of the inhabitants of Negros Occidental also came from.

I am a professional and businessman, who in my free time engage in the research, study, documentation (and writing), promotion, and propagation of the various Ilonggo and other Visayan systems/styles of Arnis/Eskrima. While conducting data gathering for my book on Arnis, I traveled to several parts of the Visayas and a few in Luzon and Mindanao. I met the late prominent Ilonggo professor, historian, and author Dr. Henry Florida Funtecha, then the Director of the Center for West Visayan Studies (CWVS) at the University of the Philippines in the Visayas (UP-V). I was so inspired for his call for locals to write their own history and not to be passive to let outsiders do it for them. He believed that such history can be written nearer to its real essence if seen from the eyes of a local who has a fuller knowledge of the inner workings of the subject.

Although he himself had written several books on local Ilonggo history and culture, Dr. Funtecha stressed that much more has not been documented about the rich local traditions, culture, and history and that the work I’m working will be one of the milestones once finished because it is the only academically prepared work in its category in Western Visayas of date. If Dr. Funtecha is only alive today, I know he will be happy to see Amaya propagating Karay-a/Ilonggo culture and history.

It is a mistaken notion that the Philippines has only one culture. Since time immemorial, our archipelago was home to many different cultures. The history, culture, and language that have largely been associated with the Filipino people is that of Luzon, where our capital is located. But in reality this will vary from place to place. In Luzon itself, the Ilocanos and Igorots have their own unique cultures as compared to say, the Tagalogs. Although we have a national language, the Tagalog-based Filipino, the Philippines is home to more than a hundred languages, all except for one belonging to the Austronesian “Southern Islands” (Malayo-Polynesian) family of languages. Amaya is a big step in showing and instilling respect to this diversity of the different cultures housed in what is now known as the Republic of the Philippines.

It is my belief, as well as some of my researcher friends, that before we can be proud to be Filipino, one must first be proud of one’s own ethnic cultural heritage be it Karay-a, Ilonggo, Cebuano, Tausug, etc. Once one’s ethnic identity had been identified and appreciated, then we can join hands and say, inspite of our varied cultures, we are all Filipinos. The Philippines is home to several cultures and that is what makes Filipinos adaptable to different situations.

History is derived from either primary or secondary sources. Primary sources are those that have witnessed the event that took place or have been part of the incident being studied, i.e. written records, fossils, artifacts, and testimony from living witnesses. Secondary sources are those that are not part of the event in question, i.e. magazines, newspapers, pamphlets, typescripts, and articles written about the primary sources (Halili 5). Admittedly, Amaya is not perfect in fully depicting “accurate” historical/cultural details. This would be understandable because obviously, the makers of Amaya relied on secondary sources. While about a year was given to research the details in Amaya, it is not enough to conduct a primary sources search, which in itself is mostly reserved to the most scholarly of scholars. And it would not be practical to do so.

Whereas the makers of Amaya have consulted two UP professors, let us not forget that academicians themselves have their own fields of expertise or specialization, much as doctors and lawyers do. Some are into indigenous lifestyles, like Dra. Alicia Magos of UP-Visayas, who lived among the Panay Bukidnons and as far as I know, did the most extensive actual and live-in study of the Binukots. So consultants function best in their own field of specialization. It is my belief that the makers of Amaya had to fill in certain details which to them may remain gray areas even after consultation with noted experts.

I agree that Amaya is a good medium to educate but I take exception to what has been said during “The Making of Amaya” that all historical details used has been checked to be authentic. There are certain depictions that are not entirely true (I’ll point them out in the next parts of this article) and the average viewers may accept it as true. A distortion repeated many times ultimately becomes “the truth” and becomes hard to correct. As a researcher myself, I’ve seen this repeated over and over in the dissemination of the history of Arnis/Eskrima. If we want to study our culture and history we need to study it in earnest and with utmost dedication.

So let me give this cavet to all Amaya supporters and fans. Let us not forget that inspite of being based on actual history, Amaya is still historical fiction. History and historical fiction are two different things. Just like when we say “based on a true story,” which is not exactly the true story. GMA is prudent enough to include in their opening this line, “Mula sa original na katha para sa GMA ni Suzette Doctolero.” I don’t know if viewers have noticed this but they should see the teleserye as it is - historical fiction.