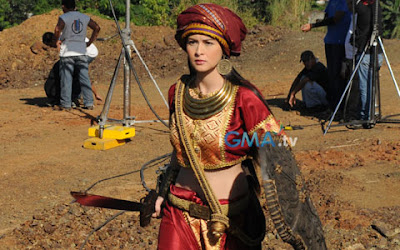 Since Amaya is set at a time where piratical raiding is the norm of the day, fight scenes are therefore a major part of the script. And from a theatrical point of view, this is the icing of the cake which action enthusiasts are waiting for. Thus, it is only proper to have a hoplological commentary on the realism of these fight sequences.

Hoplology is a new science started by the late Donn F. Draeger, a high ranking Japanese Martial Arts (JMA) master, scholar, and author. Hoplology is the study of human combative behavior. The way humans fight will largely depend on their geographical location, culture, religious, philosophical, and other beliefs, technology, political climate, social structure, and a host of many others.

For example, the fight scenes in Amaya are fast paced since it is mostly fought on the seashores which are level plain. This may not be the cause when the same conflict will be fought on rocky, mountainous, and uneven terrain, on snow, or in muddy rice fields or swamps.

A good example of how religious beliefs may influence combative behavior is that the Christianized and Islamized population of the Philippines do not practice headhunting. Of the more than fifty tribes of the Philippines, five have been identified to practice headhunting, in order of their importance: the Ilongots, Kalingas, Ifugaos, Igorots, and Tinguians, all of whom are found in Luzon, particularly in the Cordillera, Sierra Madre, and Caraballo, which are situated in Ilocandia and the Cagayan valley (Anima 1).

It is noticeable in Amaya that the female oripuns do not carry weapons nor women of nobility, including the Binukots. If fact, when Datu Bugna was teaching the young Amaya how to use the kampilan it came to a surprise to both Amaya and her half sister(s) because a Binukot is not meant to be a warrior but the better half of datu or a ginoo.

Which brings us to the first point I want to raise from a hoplological perspective. As previously stated by my good friend, colleague, and fellow researcher Dr. Ned R. Nepangue, co-author with Celestino Macachor of the best selling book “Cebuano Eskrima: Beyond the Myth,” and I concur with him, the kampilan is a heavy sword, a detail made clear by the fact that even muscular men hold it with both hands. So, it would be difficult physically, if not entirely impossible, for a young lass to handle it with ease and efficiency. The kampilan was specifically designed for the male physiology. The current Director of the Center for West Visayan Studies (CWVS) at the University of the Philippines in the Visayas (UP-V) also stressed that a Binukot is a princess, not a warrior.

The statue of Lapu-Lapu in Mactan shows him holding a kampilan.

A review of history texts will reveal almost no distinguished women warriors of the pre-Hispanic Philippines. One may come across the legendary warrior princess Urduja who is said to only marry the man who can beat her in personal combat. While the legend of this princess has been taught in schools before, today many historians agree that she is an unhistorical figure.The story of Princess Urduja reportedly came from Muhammad Ibn Abdullah Ibn Batuta a.k.a. Ibn Batuta (1304-1378).

So in the spirit of accurately educating the viewing public, it should be remembered that Amaya is a historical fiction and although it is based on historical and cultural data, it has to twist certain details to make the series meatier. On the other, GMA must be prudent enough to only make justifiable claims so that the viewing public may not be confused in believing that what has been offered to them are all historically accurate.

The first fight scene of the series showed Rajah Mangubat killing a datu using only his index finger. I strongly believe that this is not a Filipino technique and concept but that of the Chinese Martial Arts (CMA), more commonly known as Dim Mak “Death Touch.” In my research of the Filipino Martial Arts (FMA), I haven’t come across such technique as part of our martial culture, unless it has been introduced from another source, in this case Chinese Kung Fu. It is also important to note that piercing the human body with just a finger is a long standing belief in the martial arts world although to date it has not been medically supported/documented.

Also during that battle scene, as well as the one where Rajah Mangubat attacked the banwa of Datu Bugna, it was depicted that the warriors were in certain formations, like the shield men and the archers. This seems to be a western military concept, like the Greek Phalanx, which I believe is not well developed in pre-colonial Philippines because the conflicts in the archipelago at that time were not large scale wars like in Europe considering that the barangays were very small units, consisting of anywhere from 30 to 100 families. And sad but true, the Spaniards were more advanced in military discipline, tactics, and technology that inspite of their few numbers managed to conquer the then fragmented Filipinos.

I have also noticed that the archers of Rajah Mangubat shoot their arrows even if their enemies were not that close enough. Under normal combative conditions, archers would wait for the charging enemies to close in before shooting.

In the difference fight scenes, action had been blurred. Understandably this is for the safety of the actors so they can do their sequences in slow motion and speed is just adjusted mechanically. However, this will diverge from the excitement that a clear fight scene would give its viewers, considering that this is the icing on the cake. This became very apparent during the fight scene between the white Goddess Pandaki and the black Goddess. In the fight between Amaya and Angaway portions of the scene were clear enough though. Angaway, in that fight, assumed a fighting stance with the weapon in the rear, which is not ideal unless one has a taming “shield.” Amaya used a kris knife, a wavy blade generally associated with Muslim warriors of Mindanao. The Panay Bukidnon, from whose Binukot Amaya was inspired, used the blades talibung and sanduko; these are the blades displayed at the Museo Iloilo, together with the bangkaw and taming.

Since the fight scenes make use of blades, it would be nice, just to be in line with GMA’s claim to authenticity, if the production crew does not show edge-to-edge sword fights that are most often characteristic of stage combat. Skillful sword fighting makes proper manipulation of the sword so there is no, or at least minimal, edge to edge contact. This phenomenon is a unique trait of edge weapons, unlike impact weapons, such as sticks.

In one scene where Rajah Mangubat was sparring, he did a side kick, a fighting technique that is obviously of Okinawan origin, not Filipino. What’s worse, the side kick is designed for empty handed combat, hence Karate “empty hands.” The body alignment and movements for empty handed and weapons (more so on blade) fighting differ. A side kick is not compatible with movements for the use of a kampilan, remembering that it is a heavy sword. Every time a person raises his leg, he needs to shift his weight to the remaining foot. Things are complicated by the added weight of the sword in the hands. And every time a kick is thrown, the executioner of the technique risks his leg being cut off. And a cut from a kampilan can do more damage than a kick can.

Marian Rivera (Amaya) is also seen doing roundhouse, crescent, and spinning kicks in a promotional video which shows her training for her fight scenes against multiple opponents. The types of kicks she were doing were obviously derived from Korean Taekwondo, another empty handed fighting art. The same argument applies.

It should be noted that the Filipino Martial Arts (FMA) are primarily weapons-based systems even if they have their own arsenal of empty handed techniques. This makes our fighting arts unique from other Asian Martial Arts which starts training empty handed and later progresses to weapons. A soldier goes to war with weapons, as the Samurai class of Japan and the knights of Europe would show us. This is no different from the hangaway of pre-Hispanic Philippines.

In the scene where Datu Bugna was training Amaya, and in his fight with Rajah Mangubat, Raymund Bagatsing explicitly picted the left bantay kamay “guard hand” that is so indispensible in most Arnis systems of our archipelago. Bagatsing is a karateka but he gives justice to the movements inherent in a weapons fight. Also in the training scene, it was accurately depicted that sticks are primarily used for practice, especially for a child.

And most importantly, I am happy that the makers of Amaya did not adopt the term Kali to refer to the fighting art of its characters. While the term Kali has grown in popularity in the US over the years, it has never been used as a traditional term for the martial arts of the Philippine archipelago. The earliest record of the term Kali was in the 20th Century, in a book written by Placido Yamabao. In comparison, Arnis was used by Francisco Balagtas in his Florante at Laura in the 1800’s and church records show the use of Escrima as late as the 1700’s. Kali is essentially a modern term passed on as an ancient term for the Filipino Martial Arts (FMA). No historical basis can be found to prove its myriad of claims.

It is also commendable for the makers of Amaya for not using either Arnis or Eskrima, inspite of the fact that they were historical terms used by the Filipinos for their fighting arts. Both Arnis and Eskrima are Spanish-derived words that would be inappropriate in a pre-Hispanic setting. Not giving a name to the pre-Hispanic Filipino Martial Arts (FMA) and just referring it by the weapon used, i.e. kampilan, is an accurate depiction, just like when an Ilonggo says “bastonon ta karon (I’ll beat you with the stick)” or when a Karay-a says “yamingon ta ka (I’ll beat you with the stick).” In this case, baston (Sp.) and yaming (Karay-a) are terms for the weapon used.

Anima, Nid. The Headhunting Tribes of the Philippines. Quezon City: Cultural Foundation for Asia, 1985.
Posted by Conceptual Warrior at 1:56 AM

actually the death touch was a belief back then, it's called "hokhok" or kaykay.

did they use kampilans back then? I thought only the moros did