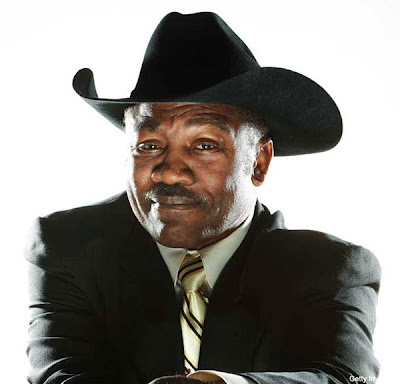 Olympic and world boxing champion Joseph William " Smokin Joe" Frazier (1944-2011) passed away due to liver cancer on November 7, 2011 at his residence in Philadelphia, Pennsylvania, USA. He was 67.

Frazier was diagnosed with liver cancer in late September 2011 and admitted to hospice care. Weeks before his death, he was said to have lost 50 lbs.

Frazier was born as the youngest of 12 children of Rubin and Dolly Frazier on January 12, 1944 in Laurel Bay, Beaufort, South Carolina, USA. He relocated to Philadelphia during his teens. He took up boxing while working in a slaughterhouse. By the age of 20, Frazier was one of the elite heavyweight prospects in the world.

Frazier won the Middle Atlantic Golden Gloves heavyweight championships in three successive years (1962-1964). He lost to Buster Mathis in the trials but had to replace him due to injury and won the heavyweight gold medal at the 1964 Tokyo Olympic Games. He was the only American boxer to be crowned champion inspite of an injured left thumb during the finals.He turned pro in 1965 and was crowned the World Boxing Association (WBA) world heavyweight champion after he TKOed Jimmy Ellis in the 5th round in 1970 at the Madison Square Garden, New York City, New York, USA. He was then small for a heavyweight, weighing only 206 lbs. Frazier went on to defend his title successfully four times, including one against Muhammad Ali, before losing it to knockout artist George Foreman in 1973.

Frazier, however, was best remembered for his trilogy with Muhammad Ali which took place from 1971 to 1975. Their first battle, dubbed "Fight of the Century” took place on March 8, 1971 at the Madison Square Garden in New York City. Both men were undefeated then. Frazier distinguished himself as the first man to defeat Ali. He floored Ali with a leaping left hook, his trademark punch, in the 15th round and snatched the victory via unanimous decision. The following year, they fought again at the same venue, with Ali winning the brawl via 12-round decision. The highly hyped and epic third meeting, dubbed “The Thrilla in Manila," was held in 1975 in the Philippines where both man completely exhausted and bloodied each other for 14 rounds. Frazier, inspite of his nearly swollen shut eye, wanted to continue but his trainer, Eddie Futch, had the fight stopped. Frazier lost and Ali kept his world title.

Ali and Frazier fought a total of 41 rounds. After the Thrilla in Manila, Frazier fought only two more times. He lost badly in a rematch with Foreman in 1976 and then retired. In 1981, he made an ill-adviced comeback where he drew with the unheralded Jumbo Cummings.

The animosity between Ali and Frazier would continue outside the ring. Ali called him gorilla and mocked him as an Uncle Tom. Frazier was bitter but in their later life, when both boxers were already slowed down by disease, Frazier had forgiven Ali for his transgressions.

After retiring, Frazier made cameo appearances in several Hollywood movies, and two episodes of The Simpsons.

In his later years, Frazier would have financial trouble and had to run a gym in Philadelphia. Frazier slowed in his later years and his speech slurred by the toll of punches taken in the ring. He, however, was still active on the autograph circuit in the months before he succumbed to liver cancer.