Rapid Journal Donated to UNO-R by James U. Sy Jr. 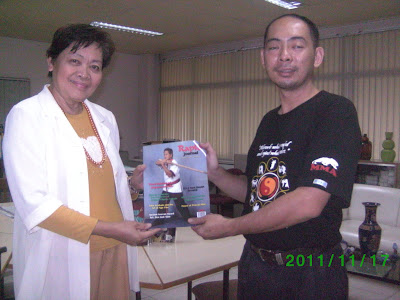 Rapid Journal was a quarterly publication based in Binondo with subscribers in Finland, France, and the USA and copies sold in Canada, Germany, Hong Kong, Switzerland, Taiwan, and Thailand. Rapid, which is an acronym for Research and Propagation for Internal Development, originally referred to the department/section of the Wushu Federation of the Philippines (WFP) that published the now defunct Wushu Newsletter in 1995. The Rapid Group was organized by Go to systematize the study of Chinese Martial Arts (CMA), most notably the internal art of Tai Chi Chuan, as well as research, document , propagate, and legitimize the arts and improve its teaching methods. When the Rapid Group separated from WFP in 1996, Mr. Go, a 2 time Southeast Asian (SEA) Games Tai Chi Chuan gold medalist, started the publication of Rapid Journal, originally exclusive to Chinese Martial Arts (CMA) but later extended to cover Filipino, Indonesian, Japanese, Korean, Western, and other forms of martial arts.

Rapid Journal was in circulation from 1996 to 2010. During those times it was the only martial arts resource in the country. It greatly differed from the average martial arts magazine, such as Black Belt, because its articles are well researched, scholastic, and with great depth. Subjects cover the historical, cultural, linguistic, sociological, anthropological, ethnological, hoplological, economic, and political factors that have influenced the development and evolution of the various martial arts from different countries and cultures.

The contributing writers for the journal have academic backgrounds which show in their works. Rapid Journal has become home to some of the most prominent, respected, and credible martial arts historians, scholars, writers, and/or authorities in the Philippines today who can take their place next to world renown martial arts authorities such as Donn F. Draeger (Nihon Koryu Bujutsu), Stanley Pranin (Aikido), John Chambers (European Renaissance fencing), etc. Notable Rapid Journal writers include Dr. Ned R. Nepangue of Cebu, anthropologist and University of the Philippines Prof. Felipe Jocano Jr., FMA Master Pedro Reyes of Manila, University of the Philippines College of Human Kinetics Prof. Marilitz Dizon, Acupuncturist and FMA Master Rene J. Navarro, University of St. La Salle alumni and Negrense FMA researcher/historian/writer James U. Sy Jr. of Bacolod, among others.

Director Arabella Ananorio was happy in acquiring the donation for UNO-R, “These would prove to be very useful to our criminology students. We are glad to get hold of these scholastic works because these are not commonly found in the average bookstore. Students who wish to researchand know more about the martial arts now have more reliable sources.”

Previously, Go had also donated sets of Rapid Journal thru Sy to the West Visayas State University (WVSU) and University of the Philippines in the Visayas (UP-V) in Iloilo City, Panay, the University of St. La Salle (USLS) in Bacolod, Negros Occidental, and the National Library in Manila. Additional sets are mulled to be donated to Cebu and Cagayan de Oro, places where Sy plans to visit for his research in his book in the Filipino Martial Arts (FMA).

It is the hope of Go that the donations made to these academic institutions will provide researchers with the necessary reliable reference materials that are otherwise absent in almost all academic libraries. There are many myths and fallacies in martial arts history that have been transcribed or copy pasted from unreliable sources or no source at all at times and many times evolved into further untruths. The Rapid Journal serves to correct these mistaken claims and guide researchers to reliable and legitimate research sources for martial arts. Rapid Journal also sought to educate the public of the cultural and wellness benefit of the martial arts as well as the foundation philosophies and principles from which they were founded upon.

Interested parties may read the journals at the UNO-R College Library.
Posted by Conceptual Warrior at 10:02 PM