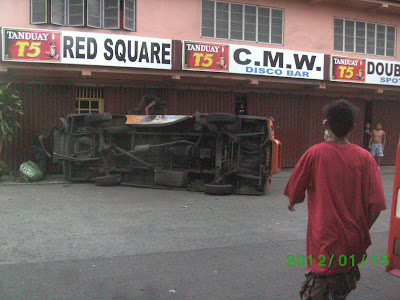 Just moments after the Bata-Libertad jeepney went airborne and dropped on its left side. Note that the rear axle was twisted and the right side of the body of the vehicle was folded. At this initial stages of the accident two vigilant bystanders, one on the rear and one on top of the vehicle, went to action, trying to pull the two passengers to safety (James U. Sy Jr./NDB/WVJ Photo). 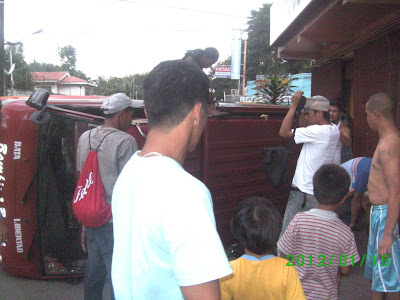 A vigilant bystander wastes no time in pulling out an unconscious woman passenger (James U. Sy Jr./NDB/WVJ Photo). 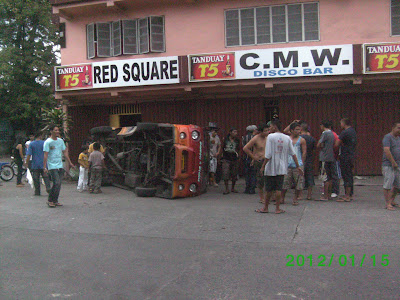 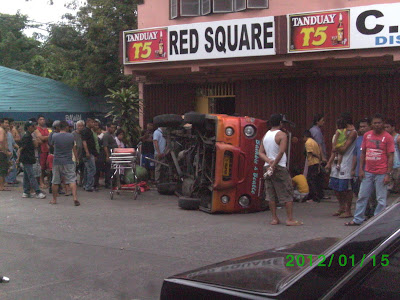 Bystanders starting to gather on the collision site until the area was covered with many people, investigators, and medical personnel (James U. Sy Jr./NDB/WVJ Photo). 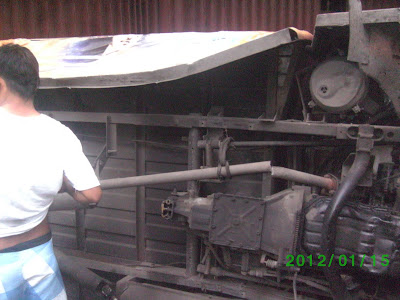 Close up of the point of impact on the collapsed jeepney (James U. Sy Jr./NDB/WVJ Photo). 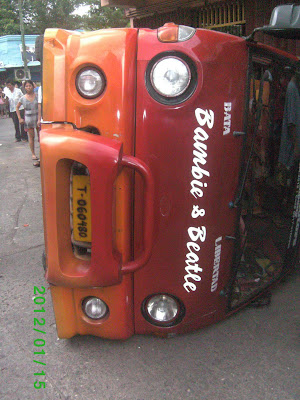 The front side of the collapsed jeepney (James U. Sy Jr./NDB/WVJ Photo). 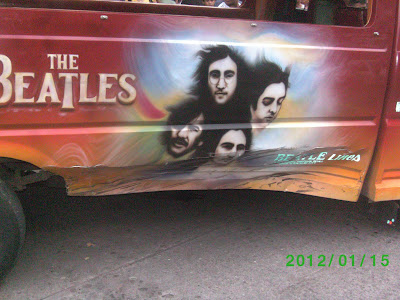 The damaged area of the jeepney as shown after the vehicle has been restored to its vertical axis by helpful bystanders (James U. Sy Jr./NDB/WVJ Photo). 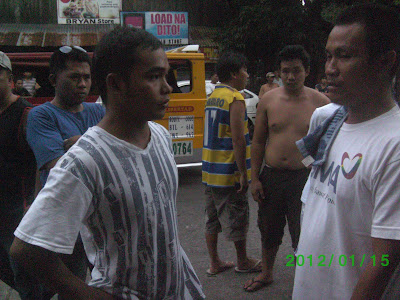 The driver of the jeepney (left, front) refused an interview to air his side of the story (James U. Sy Jr./NDB/WVJ Photo). 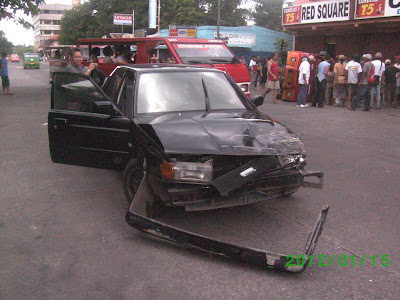 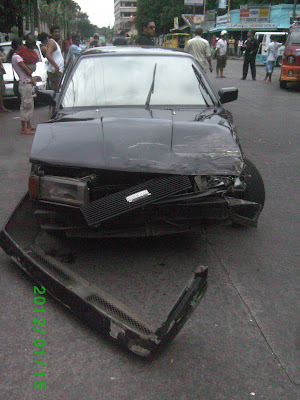 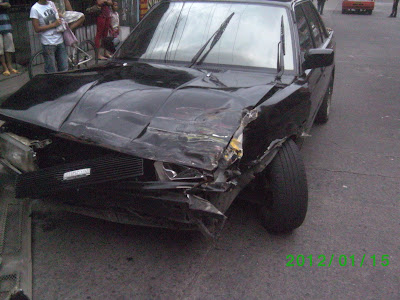 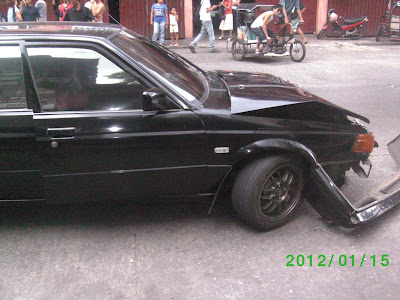 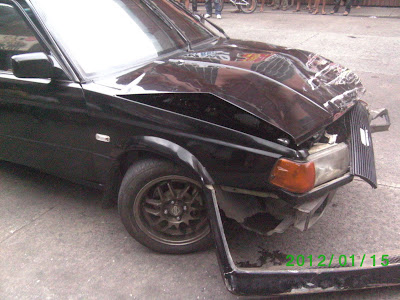 The damage on the car of Antonio Escuadra shown from all sides.(James U. Sy Jr./NDB/WVJ Photo). 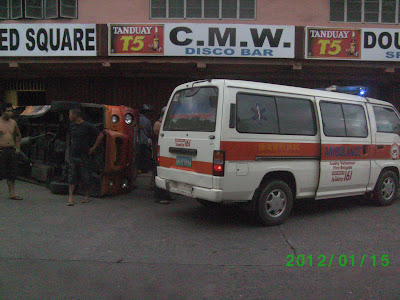 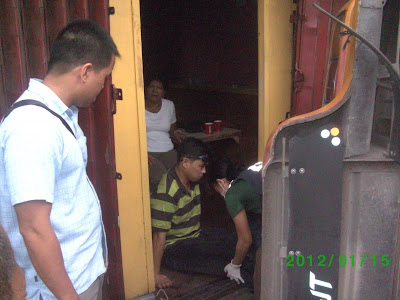 The Amity Volunteer Fire Brigade 161 medical team attending to a passenger who hurt his leg/s during the collision (James U. Sy Jr./NDB/WVJ Photo). 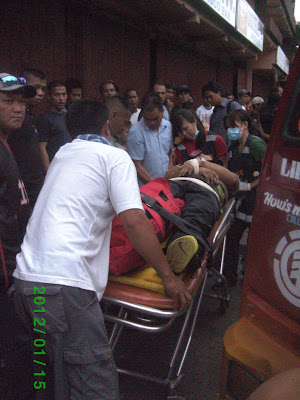 It was like a scene from a Hollywood movie, a speeding vehicle is thrown airborne during a collision, except this time there were no special effects and everything was for real. This was what happened along Locsin St. when two vehicles collided yesterday, January 15, 2011, at about 12:20 PM.

Two jeepneys were travelling side by side from Hernaez St. and into Locsin St. Just before reaching the intersection at Locsin-Rosario Sts., the Bata-Libertad jeepney on the left, with plate No. T-060480, tried to overtake the other PUJ. At that point, a black car, with plate No. PRM-177, driven by Antonio Escuadra, 53, of San Carlos City, was also heading towards the intersection. The PUJ on the right gave way to the car but the one on the left went ahead and speed away to overtake. The jeepney was clipped by the car on its right side and forced across the street, directly in front of Red Square, C.M.W. Disco Bar, and Double “L” Spotlite. The impact was highly magnified by the speed of the overtaking jeepney, which in turn forced the vehicle to fly in the air, collapse on its side, and fall on its left side.

The car on the other hand, also screeched out of its lane and initially followed a parallel path to the collapsing jeepney before turning to the other side of the road and stopping nearly in the sidewalk, just a few paces away from Derd’s 8 Tailoring and Sportswear.

The rear axle of the jeepney was twisted and a pipe was broken. There were shreds of broken glass on the pavement and the right side of the vehicle folded into a crease. The driver was not injured. However, his two passengers, a couple, suffered injuries. The woman, who was unconscious, was pulled out by a concerned bystander from the collapsed vehicle. It took her some minutes to gain consciousness and be able to sit down. She said her leg/s was/were aching. Her husband, who was found, sitting outside of the rear side of the vehicle and in the entrance of Red Square, injured his leg/s.

The passengers of the black car were also a couple. Escuadra and his 51 year old wife just got out of church from the baptism of their grandchild. They were unhurt because they wore seatbelts. However, the front side of their car, including the hood, was a wreck. The car’s door on the right side was also out of its frame slightly. Escuadra managed to get some control of his car otherwise he could have also crashed into the establishments, next to the collapsed jeepney.

The Amity Volunteer Fire Brigade 161 medical team responded at a very short interval after the accident and attended to the injured. The driver of the jeepney refused an interview with the Negros Daily Bulletin and Western Visayas Journal.

It was fortunate that the jeepney didn’t have many passengers otherwise there would be many injured. If there’s anything that this incident had taught those who witnessed the accident, including this writer, it is that overtaking may save you a little time or it can also waste a lot of your time and put many people’s lives at risk. Discipline in the road is all we can ask for now that this has happened.
Posted by Conceptual Warrior at 1:49 AM