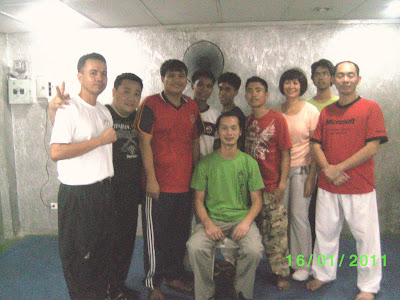 Resource Instructor was Ng Yung-Wa Sifu, who descended from the Ip Man line of Wing Chun. Grandmaster Ip Man (1893-1972) was the teacher of the legendary Bruce Lee Siu-Long (1941-1973), who popularized Chinese Kung Fu in his movies.

Ng was born in Hong Kong and later resided in the Netherlands. He started martial arts training in Muay Thai in 1994 and continued to do so for two years. At 20 years of age, he started his studies of Wing Chun Kuen with Nils Sifu and then Dick Wachtbeger Sifu, a student of Wang Kiu Sifu, who was in turn a student of Wing Chun Grandmaster Ip Man of Hong Kong. Ng started assisting with the conduct of classes after three years. In his sixth year, he was already an Instructor at the school. Ng Sifu had a third teacher he could not name because he was made to promise not to. Ng Sifu has a total of 11 years experience, both studying and teaching, Wing Chun Kung Fu.

Ng Sifu travelled to Bacolod City on September 15, 2010 to study higher meditation techniques at the Humanistic Academy of Life and Arts at the Yuan Thong Temple, 2876 Burgos St., 6th Rd., Bacolod City. About a week after entry into the program, Ng Sifu introduced Wing Chun Kuen at the temple. Previously, Ven. Yung Ko had introduced the Tai Chi Fan to members of the Buddha’s Light International Association (BLIA) at the temple.

Ng Sifu was the first one to publicly teach Wing Chun Kuen in Bacolod City and Negros Occidental. While there are individuals who know Wing Chun in Bacolod, they have chosen to remain anonymous and/or keep their art a secret or as a family heirloom. Bacolod had other visitors who had knowledge of Wing Chun, like Dr. Ned R. Nepangue of Cebu, but they have not taught publicly, and if they did, only to select individuals.

The seminar began with an overview of the Wing Chun system, starting with the burning of the Shaolin Temple by the Manchus, the escape of the Five Ancestors, and the subsequent founding, establishment, and propagation of Wing Chun Kuen “Forever Springtime Fist (Cantonese)” in China, Hong Kong, and the world (read the art’s history in Part II).

Ng Sifu then explained the principles that make Wing Chun different from other styles of martial arts. The six forms that were traditionally taught in Wing Chun were also enumerated.

Jeremy John Dy, an alumni of St. John’s Institute (SJI) who had studied Kimdo Taekwondo before, was enthusiastic about learning Wing Chun from an actual teacher. “I did self study of Wing Chun and I know it is effective. Now that I’ve experienced it first hand, my conviction just became stronger. Ng Sifu’s punch may not look that powerful but if you’re at the receiving end of one it feels like being struck in front and having an exit wound at the back. There’s no magic about it, only science behind every move,” Dy commented.

I think before the coming of sifu Ng Yung-Wa in Bacolod there existed a school of wing chun club/practitioners in the Talisay area. One of the practitioner is currently practicing in the capitol lagoon. The club or group existed since 2009 or before yet. for your info.