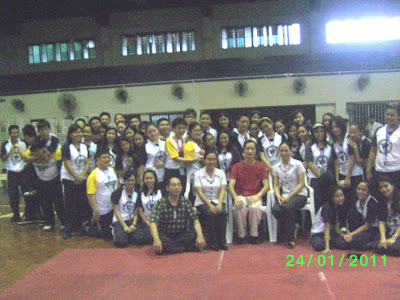 The Wing Chun lecture and exhibition was a milestone in the history of BTTHS because it was the first ever to be held within its premises since its founding many decades ago.

The purpose of the demo was to introduce students to one aspect of the Chinese culture that is often neglected by scholars, its martial heritage. In centuries past, Chine reigned as a superpower and it was the center of innovations and learning. Japan and Korea among others sent their scholars to study in China, most especially during the Tang Dynasty. These scholars studied the different sciences and arts perfected by the Chinese, among them medicine, mathematics, philosophy, calligraphy, and martial arts. Testament to this is the use of the Japanese and the Koreans of the Chinese ideographs, locally known as kanji and hanja in Japan and Korea respectively. The cultural influences of China are also seen in Burma, Indonesia, Malaysia, the Philippines, Singapore, Taiwan, Thailand, and Vietnam among others.

The Chinese Martial Arts (CMA), more commonly referred to as Kung Fu “Skill, Hard Work (Mandarin 功夫 , Pinyin: Gōngfu)” or more properly, Wushu “Martial Art (Mandarin 武術),” were developed by the different sectors of Chinese society to protect life, property, and freedom. All throughout China there are hundreds, if not thousands, of styles of Kung Fu. One of these styles is Wing Chun.

Wing Chun Kuen (詠春拳“Sing Praise Spring/Spring Chant Fist” or 永春拳 “Eternal/Forever Springtime Fist”) is a style of Kung Fu founded by the nun Ng Mui (五枚大師 Wǔ Méi), one of the Five Elders who escaped when the Shaolin Temple was burned down by the Ching Dynasty. Since Ng Mui was a woman she had to rely on technique rather than brute strength. Her Kung Fu was inspired by the movements of the snake and crane fighting each other, which she had observed. She taught the art to her student, Yim Wing-Chun (嚴詠春 Pinyin: Yán Yǒng Chūn / Jyutping: Jim Wing-Ceon), from whom the then nameless art got its name from.

Ng Sifu has a total of 12 years experience, both studying and teaching, Wing Chun Kung Fu. He started assisting in instructing on his third year and became a Full instructor on his sixth year. Ng Sifu had a third teacher he could not name because he was made to promise not to.

Ng Sifu explained the code of ethics (9 Rules of Conduct) of Wing Chun and how to apply them, the origins of Wing Chun Kuen and its characteristics that make it unique from other systems of Kung Fu. He demonstrated several self defense techniques using regulated force as well as the hand speed which made the art popular.

For more info, please contact song4springtime@gmail.com or sophiahecate@gmail.com.
Posted by Conceptual Warrior at 1:12 AM