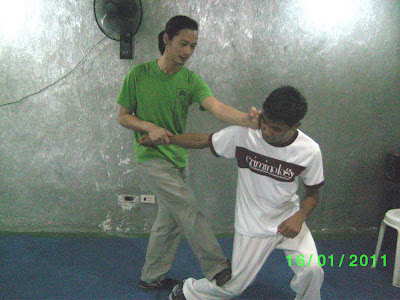 People outside the martial arts community would normally show a blank face when they hear the name Wing Chun. This is not surprising considering the existence of hundreds, if not thousands, of styles of Chinese Martial Arts (CMA) in China, more commonly referred to as Kung Fu “Skill, Hard Work (Mandarin 功夫 , Pinyin: Gōngfu)” or more properly, Wushu “Martial Art (Mandarin 武術).”

Without a doubt Hong Kong-native and world martial arts superstar Bruce Lee Siu-Long (1941-1973) is the most popular exponent of Wing Chun as Steven Seagal is to Aikido and the Gracie Clan to Brazilian Jiu-jitsu. But where did Lee’s superb fighting skills came from? This news feature will tell you just that.

China was ruled by the Manchus during the Ching/Qing Dynasty (1644-1910). The Manchus, who then comprise only 10% of China’s population, was seen by the Han Chinese as abusive foreigners who conquered their country. As such, many insurgencies were committed by rebels bent on restoring the Ming Dynasty. Many of these rebels would seek refuge in the famed Fujian Shaolin Temple and many studied or enhanced their Kung Fu skills in the Buddhist temple.

The masters of different styles at the temple decided to come up with a new system of Kung Fu. The existing systems of Kung Fu at that time although very powerful, took about 15-20 years to master. That was not fast enough to train rebels. So the elders started developing a very straight forward style that can be learned in a relatively shorter time yet be as effective, if not better, that the existing styles.

However, even before this new style can be completed, Ching forces burned down the Shaolin Temple. Chinese tradition tells us that among those who escaped were the Five Elders, one of whom was the nun Ng Mui (五枚大師 Wǔ Méi), the Founder of Wing Chun Kuen.

Ng Mui completed the new style of Kung Fu which was being synthesized by the Shaolin grandmasters and taught it to her disciple, Yim Wing-Chun (嚴詠春 Pinyin: Yán Yǒng Chūn / Jyutping: Jim Wing-Ceon “Sing Praise Spring/Spring Chant”), who was being forced to marrying a local warlord. Ng Mui advised Wing Chun to tell the warlord to give her a year so she can break up with her fiancé Leung Bac-Chou (Leung Bok-Chau / Leung Lan-Kwai) who lived in a different province. Travelling at that time was by horse and takes a great deal of time, especially between provinces. During the allotted time period Ng Mui trained Wing Chun in the new system.

When the moment of truth came, Wing Chun announced that she will only marry the local warlord if he can beat her in a martial arts bout. She defeated the bully and went on to marry her fiancé Leung Bac-Chou to whom she taught the art. At least one source says that it was her husband who named the then nameless art Wing Chun.

Ip Man was the first one to teach Wing Chun publicly based on a school structure and thus, many present day Wing Chun practitioners can trace their roots back to him. However, there are several branches of Wing Chun, depending on where a certain tradition stemmed out from. Other Wing Chun branches that are not related to the Ip Man lineage include Yiu Kai branch, Jiu Wan branch, Gulao / Koo Lo Village branch, Pan Nam branch, Yuen Kay-San branch, Vinh Xuan (Vietnamese Wing Chun), Cho Family branch, Hung Fa Yi/Hung Suen Wing Chun Kuen, Pao Fa Lien branch, and Fut Sao “Buddha Hand” branch among others.

Today, Wing Chun is practiced in more than 64 countries and is the world's most popular system of Southern Kung Fu. Wing Chun joins Hung Gar and Choy Lee Fut as "The Three Great Martial Art Schools of South China."

Ng Yung-Wa Sifu, the Resource Instructor for the “An Introduction to Wing Chun Basics” seminar last January 16, 2010 in Bacolod City, was a student of Dick Wachtberger Sifu, who in turn was a student of Wang Kiu Sifu, one of the students of Wing Chun Grandmaster Ip Man of Hong Kong. Ng Sifu will be travelling to Taiwan this coming February 1 but he plans to go back three months after, to set up a Wing Chun school in Bacolod.