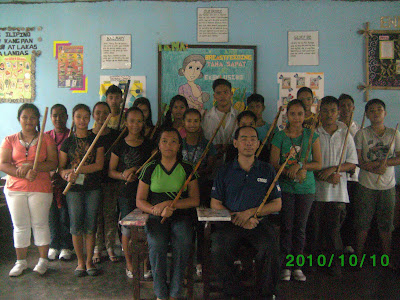 English and Filipino teacher Mrs. Ariane M. Ignacio organized the 1st OLPA Sports Arnis Seminar last October 10, 2011 in one of the classrooms of the Our Lady of Pillar Academy (OLPA), Brgy. Ma-ao, Bago City. The seminar was attended by 16 of the 21 students expected to represent the academy during the Area Meet Arnis Competition this coming October 13-15, 2011 at the La Consolacion School Isabela Negros Occidental, Inc. in the Municipality of Isabela.

Ignacio, who was originally a MPEH teacher, previously commissioned Grandmaster Sabas T. Gubaton of the Oido de Caburata Arnis Group (ODCA) to serve as the Trainor for the Arnis Team of OLPA. The lesson focused on the fundamentals of the particular style of Arnis of GM Gubaton for use in the DepEd Labanan category. The OLPA Arnis Team made their debut this year at the Division Meet. Since then the lessons with GM Gubaton ended.

Ignacio, wanting to maximize the training of OLPA players, invited Sy to teach a seminar on both Anyo and Labanan events with their corresponding set of rules. Sy had studied and is certified in different systems of Arnis by various grandmasters, among them Oido de Caburata Arnis Patriarch GM Abraham T. Gubaton and Chief Instructor GM Sabas T. Gubaton. He had attended a number of Sport Arnis seminars conducted by Arnis Philippines-Negros Occidental Commissioner Grandmaster Danilo L. Cardinal. Mary Camille Gubaton and Joshelle Rianne C. Gubaton, the granddaughters of the Gubaton grandmasters who studied basic empty handed conceptual women’s self defense under Sy, recommended Sy to Ignacio.

Sy began the seminar with doble baston fundamentals as components of the anyo. Finer points were given for the wrist position, angling of the weapon, body torque, force generation, proper breathing, and proper body alignment. The training then proceeded to the Labanan category where Sy used the Yasay Sable system of the famed Yasay Clan of Bago City as the teaching format for sparring. Students were taught basic positioning, evasive footwork, otso-otso, strike interception, and basic competition strategy. A portion of the seminar was devoted to the athlete’s conditioning. The seminar closed with a few demonstrations of combative arnis applications.

Mrs. Ariane M. Ignacio organized the Sport Arnis seminar with the support of Principal Candelaria Balbao.
Posted by Conceptual Warrior at 3:12 AM