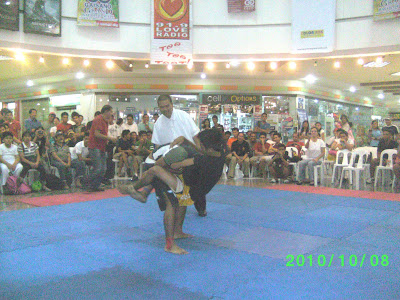 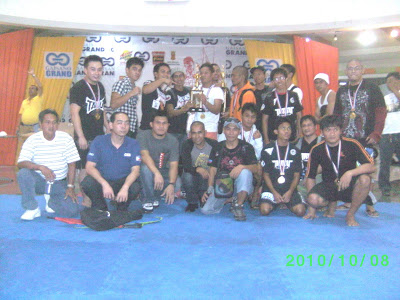 REESULTS. Gerald Hans Gonzales of TH, 27, 105 lbs., forced Letmar Bañares of IAMMA, 115 lbs., to tapout at 3.53. It was Gonzales’ third fight. His teammate Franklin Olimpus, 20, 115 lbs., who holds a grappling record of 1-1 before the fight, got a decision win over Dondon Baylon of S&SB, the nephew of SEA Games Judo champion John Baylon. Olimpus got his very first win last year at the Freestyle grappling tournament.

Herbert Jocson of TH, 22, 120 lbs. won over Mark Mahusay of SSP-B, 130 lbs., via points. It was Jocson’s 2nd win in a grappling competition; his first win was at Tribe WAR VII. Elmer Tortogo of TH, 130 lbs., won against Daryl Garcia of SSP-B via default. Prior to the fight Tortogo had a 1-1 grappling record, the win of which was during the last installment of Tribe WAR.

Multifaceted boxer Nonoy Plomeda of SSP-B, 31, 130 lbs., submitted Jay Cabarobias of IAMMA with a Kimura at 2.22. Plomeda was rated no. 5 in the Philippines as an amateur boxer and compiled a 16-1 pro boxing record. He has a 9-2 MMA record, has won at the Universal reality combat Championships (URCC) last year, and competed at the international event Pacific Extreme Combat.

Altun Yu of SSP-B, 30, 160 lbs., forced a tapout from Dandy Visitacion of S&SB with a scarf hold at 1.40. It was Yu’s 2nd grappling win, the first of which was during tribe WAR IV. Debuting Justin Tolentino of TH, 180 lbs., won over Carlo Christo Alicaya of IAMMA.

In the main event, which was in the openweight class, the larger Jimmy Soquiño of TH, 190 lbs., went toe to toe with Alexander Villa of IAMMA. Inspite of his size disadvantage, Villa gave a well fought fight, squirming out of very tight situations which ordinary fighters might find difficult to get out of. Some spectators described him as being “daw isda, syado kadanlog.” But in the end Soquiño took the win by reaching the maximum 15 points, within 6 minutes. Soquiño did more pinning and offensive.