PAGCOR Arnis for Health to be Concluded Fri. by James U. Sy Jr. Some of the PAGCOR employees who participated in the Arnis for Health course, which was organized by MWR Coordinator Mayu Lozada, together with Resource Instructors (seated from left) Bryan Baylon Sensei, Chief Instructor of the Musubi Aikido Dojo Bacolod, Maxwell “Max” J. Maun Sensei, Master of Herada Pigada Arnis and Founder/Chief Instructor of Bacolod Aikido Enthusiasts (BAE), and Master James U. Sy Jr., Founder of Conceptual Arnis System and the Conceptual Martial Arts Society (CMAS), Inc. 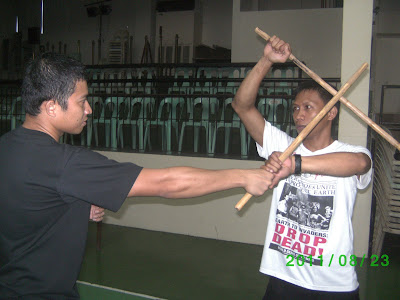 Mayu Lozada (right) parries the attack of Errol Francisco and prepares to deliver a counterattack during one of the training sessions of the PAGCOR Arnis for Health course at the PAGCOR Amphitheater (James U. Sy Jr./CMAS Photo).

October 28, 2011 will be the final day of the 30-session Arnis for Health course for the employees of the Philippine Amusement and Gaming Corporation (PAGCOR) which started in the middle of August 2011. The program was organized by Mayu Lozada, MWR Coordinator, as part of PAGCOR’S Wellness and Health Program for all of its employees.

Maxwell “Max” J. Maun, F&B Supervisor, was tapped as the Resource Instructor for the course. Maun is a Master of the Herada Pigada system of Arnis, which he learned from his uncles Maj. Pedro Doromal Jr., Capt. Nelson Doromal, and Robert Doromal; He is also the Founder/Chief Instructor of the Bacolod Aikido Enthusiasts (BAE) and former Arnis Philippines Negros Occidental Commissioner. Master Maun was assisted by James U. Sy Jr., Founder/Master of the Conceptual Martial Arts Society (CMAS), Inc. and the Arnis system that bears the same name, and Bryan Baylon, Chief Instructor of the Musubi Aikido Dojo Bacolod. Sy and Baylon had also studied Aikido under Maun Sensei in the past.

Not less than 20 employees participated in the program. The training was originally done every Tuesday, Thursday, and Saturday but was later transferred to Monday, Wednesday, and Friday towards the end of the course. Practice was originally held at the PAGCOR Amphitheater but was later transferred to the Pool Side/Weights Gym. PAGCOR provided the sticks used for the training.

Master Maun taught the fundamentals and the corridas and tahi-tahi flow drills of the Herada Pigada System to improve the coordination and reflexes of the employees at the same time giving them an invigorating workout. Training in Arnis, or any legitimate martial art for that matter, benefits the body because of more oxygen flow to the heart and the release of hormones which calms the mind, which results to better performance in the job.

Herada Pigada was evolved by the aforementioned Doromals, along with their three other brothers and their father Pedro Doromal Sr., from the Bayoneta Carada taught to them by USAFFE Army Infantryman Grandmaster Benito Agui of Cadiz City. The style is characterized by the forward pressing movements; hence, the adoption of the corrupted form of the Spanish pegar “press” in its name.

When Master Maun took a leave in September, Master Sy and Baylon Sensei took over the instructions. The duo continued the fundamentals taught by Master Maun and Sy also introduced aspects of his Conceptual Arnis System, which is a composite of several traditional Negrosanon systems of Arnis, among them Lapu-Lapu Viñas Arnis, Yasay Sable, Oido de Caburata, and Original Filipino Tapado.

PAGCOR officials hope that with the program they had equipped the participants to better care for themselves and to make exercise a good part of their lifestyle for better health and well being.
Posted by Conceptual Warrior at 11:05 PM