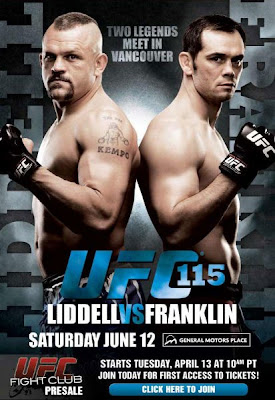 Franklin replaced former UFC light heavyweight champion Tito Ortiz (B: 1975) after the latter withdrew from his fight with Liddel.

Early on Franklin threw low kicks to Liddell's leg to affect his base and by extension, the push off in his punches. Liddell answered with his own kicks, even one to the head, something that UFC fans have not seen him do in his previous fights. One of the kicks of Liddell broke the left arm of Franklin yet he never quit.

Liddell took the fight to the mat just before the midway point, another thing that fans don't see Liddel doing often. When the two men got back up, there was a cut between Liddell's eyes. The two men continued with an exchange. Liddell staggered Franklin briefly with a right hand. During the exchange Liddell walked into a right hand that dropped him to the mat. Franklin followed up with some more shots to the head of the fallen Liddell before referee Herb Dean stopped the bout at 4:55 of the first round.

In the co-main event, heavyweight Pat Barry knocked down his idol Mirko "Cro Cop" Filipović of croatia (B: 1974) twice early on in the first round. There was a swelling in the left side of Cro Cop’s face. It both cases, Barry didn't rush in to finish Cro Cop. The crowd roared when both fighters hugged in respect during the round.

Cro Cop threw his trademark kicks and a flurry of punches in the second round.
Both men clinched to the fence where Cro Cop threw knee strikes. After a restart, both men traded leg kicks. The fight went down and Cro Cop ended in the top position and briefly got the mount and tried to apply a choke.

In the third round, a high kick by Crop Cop was countered by Barry with a low kick, sending the Croatian to the mat. Barry also scored with a looping left hand. Cro Cop pressed forward with punches which sent Barry to the mat. Cro Cop capitalized and pummeled him with fast short punches then shifted into a rear naked choke which resulted to Barry tapping out at 4:30 of the 3rd round. It was Cro Cop's fourth submission victory during his 9 year MMA career. Cro Cop improved to 27-7-2, 1 NC 20 KO while Barry fell to 5-2.
Posted by Conceptual Warrior at 8:18 PM