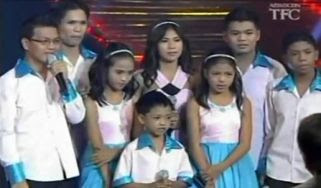 The chorale group Luntayao Family of the Municipality of Hinigaran, representing Negros Occidental, got the highest text vote of 28.19% among six contestants during the 5th batch of the semi-final round of the Pilipinas Got Talent (PGT) last May 29, 2010 to automatically qualify them for the finals scheduled for June 12-13, 2010 at the Araneta Coliseum, Cubao, Quezon City.

The Luntayao Family is the first from the Visayas to qualify for the finals.

Violinist Maria Jeline Oliva of Naga City and wacky reggae duo Powerpuff Corn of Baguio City were voted second and third highest with 20.62% and 18.71% respectively. The judges were unanimous in their decision for Oliva to qualify for the finals.

The Luntayao Family and Oliva are now among the 10 finalists. The others are singer Jovit Baldivino of Batangas, ventriloquist Ruther Urquia of Las Piñas, magician Allan de Paz AKA Alakim of Novaliches, Quezon City, Fil-Norwegian crooner Markki Stroem, guitarist Keith Clark Delleva of Pasay City, breakdancers Velasco Brothers of Batangas, Ezra Band of Davao City, and Balladeer Sherwin Baguion. Jovit Baldivino owns the highest among the highest text votes of the 10 finalists, garnering 80% during his batch showdown compared to the 17.99% to 28.++% of the other contestants.

The first round was the auditions, which ran from November to December 2009 in Batangas, Cebu, Baguio, Cagayan de Oro, Davao, and Manila. The second round was the Judges' Call, where 220 acts were considered for evaluation for the next round. The third round was the live semi-finals were the 36 of the 220 in the second round chosen by the judges were made to perform live on TV.

The contestants for the sixth and final batch of semi-finalists that will showdown this f this coming June 5, 2010 are Baguio Metamorphosis, Imusicapella Chamber Choir, Carl Malone Montecido, Josephine Aton, and Hello World.
Posted by Conceptual Warrior at 8:27 PM