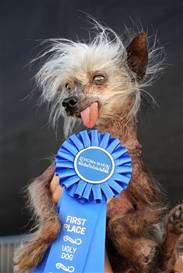 The dog was rescued from a home when she was 7 and was brought to dog trainer Dawn Goehring who started her in a career in resort show business in the Smoky Mountains. She starred in shows at the Comedy Barn in Pigeon Forge as part of a troupe of dogs that Goehring had trained, had appeared on The Animal Planet cable show Dogs 101, and was on billboards and in a commercial.

Miss Ellie helped Goehring raise over US$100,000 for the Sevier County Humane Society. Because of this, Pigeon Forge Mayor Keith Whaley honored the dog by proclaiming November 12 as "Miss Ellie Day."

Miss Ellie's pimples and lopsided tongue that always sticks out of the side of her mouth had won her the 21st Annual World's Ugliest Dog Contest in 2009 in Petaluma, California. She was set to travel to California this month to defend her title.

Miss Ellie was blind in her final years. Miss Ellie will be cremated.
Posted by Conceptual Warrior at 6:36 PM