Grandmaster Alejandro “Andy” Abrian, Founder of Moro-Moro Orabes Heneral Arnis, passed away on April 18, 2010. He was 76.

GM Abrian was born on November 3, 1936 in Eastern Samar. At a time when Flash Elorde of Cebu reigned as the world boxing champion, Abrian was into boxing. Later he sought out a friend of his uncle who was a boxer living in the next town. Mang Pasi was also an Eskrimador aside from being a boxer. The teen had a few rounds with the boxer after which Mang Pasi adviced Abrian to take up Eskrima instead.

Since then Abrian trained in Eskrima by himself by climbing coconut trees, hunting wild animals, and doing drills with half of his body immersed in the sea. He picked up pointers from local eskrimadors.

Abrian later relocated to Manila where he worked as a janitor at the Luneta Park. The Kali Ilustrisimo group (now Kalis Ilustrisimo) of Grandmaster Antonio Ilustrisimo is among the Eskrima groups who conduct their training at the park. Abrian joined the group but soon left and in 1955 founded his own style which he called Moro-Moro Orabes Heneral Arnis.

The name Moro-Moro is homage to the fact that GM Abrian’s style is a modification of a Moro eskrimador’s style who he saw performing in his home province. Orabes and heneral are terms used by Samareños to refer to low and high strikes respectively.

GM Abrian started teaching his brand of Eskrima in the 1980s. His Eskrima primarily teaches single stick, single knife, and empty hands with double sticks and stick and dagger taught later in training. The style is characterized by fast footwork, dance like movements from low, crouching stances, and the absence of choreographed or flow drills. GM Abrian also integrated Boxing’s bobbing, weaving, ducking, and principle of putting the body behind a strike into his Eskrima. Disarming is also taught in Moro-Moro Orabes Heneral Arnis.

Grandmaster Alejandro “Andy” Abrian was among the eskrimadors featured in the book Masters of Arnis, Kali, and Eskrima by Edgar Sulite and was in the cover of the Vol. 5 No. 4 (Book 18 2001) issue of the Rapid Journal. Cinco Teros DVD, a docufilm on GM Abrian's style, has also been produced. 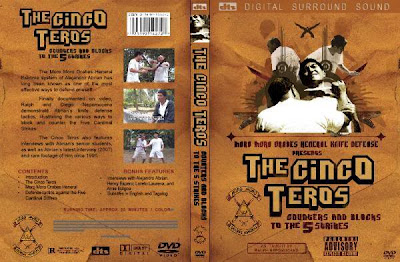 In September 2006, GM Abrian suffered his 6th stroke, leaving him confined to a chair with slurred speech, impaired hearing, and unable to practice Eskrima. Three months after, hr taught an Australian from his chair; he had also taught his latest student Diego Nepomuceno by proxy. One of GM Abrian’s students, Punong Guro at Nagtatag (Grandmaster/Founder) Henry Espero of Barrio Tagdon, Barcelona, Sorsogon, Bicol Region, founded his own style of Rapido Realismo Kali.
Posted by Conceptual Warrior at 12:35 AM