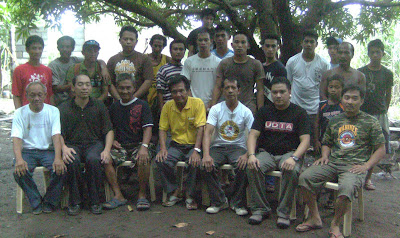 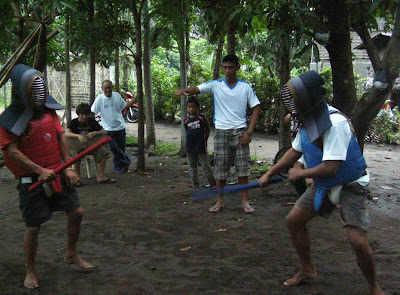 GM Isaac Guarra and his family treated the guests to a filling breakfast and lunch, which was a despidida get together for his son, Master Dexter F. Guarra, a seaman, who is set to leave for Manila this coming July 25, 2010.

GM Cardinal led the officials-trainee in going through the various commands, hand signals, and gestures for referees and scoring method of judges as used by Arnis Philippines and the International Arnis Federation, the world governing body for sport Arnis.

The second half of the review involved four actual bouts of three rounds each where the trainees were given hands on practicum on refereeing the bouts. The other trainees were either assigned as judges or timers. Dajao and Ganzon guided the judges in keeping track of the scores and the proper use of the red and blue flags for announcing the winner. Members of the Guarra Clan in the compound gathered and cheered the fighters.

The review is a preparation for the upcoming event, the 1st GSMASDA-Arjuka-CMAS Arnis Expo & Tournament, mulled for August 1, 2010 at the Gaisano City Bacolod Supermall.
Posted by Conceptual Warrior at 11:36 PM