Sensei Pat Prologo died in his sleep on July 2, 2010. This article is in memory of our teacher in Aikido and Arnis.

(This is a reprint of Mr. Narciso (Hansy) L. Alojado's article entitled "SENSEI PAT PROLOGO: SURMOUNTING THE ODDS WITH AIKIDO" in Rapid Journal Vol. 13 No. 1 - 2008) 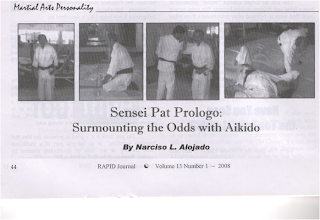 The last time we visited Sensei Pat Prologo, the headmaster of Shinsei Aikido Society, was when he was suffering from Parkinson's disease (A chronic progressive neurological disease chiefly of later life that is linked to decreased dopamine production in the substantia nigra and is marked especially by tremor of resting muscles, rigidity, slowness of movement, impaired balance, and a shuffling gait.) We were surprised that he is still teaching basic traditional Aikido. In fact, we even helped him tie his belt. His hands were trembling as we tied his belt. He claims that his disease was a result of too much sparring in arnis (which I doubt). But anyway, he also said that if he will not keep on practicing , the trembling of his hands and feet would not stop.

I met Sensei Pat Prologo, when I enrolled my son in the training school of his late brother George Prologo's Judo at YMCA building. It was in the summer of 1995 when I brought my son to be enrolled in Judo. There I met Sensei Pat and he invited me to a meeting that was the beginning/revival of his Aikido School. We met later to revive the club that was inactive for the past couple of years.

The original club was a judo club in 1986 that was founded by the late (Sensei) Rene Cornel, George Prologo, Rudy Vivero and the present headmaster, Senseir Pat Prologo. Their orientation was in Judo because most of them were Judo practitioners since 1960. Sensei Pat (as his students call him) acquired his judo skills while he was still in college. It was in 1960 that Sensei Pat then a working student in Caltex Bacolod organized the Caltex Bacolod Judo Club. Their instructor at that time was Ignacio Ibisa. At that time the club was already a member of PAJA (Philippine Amateur Judo Association).

Sensei Pat's aikido was greatly influenced by the teachings of Ben Ticao and Anong Javellana. He still uses the traditional way of teaching aikido 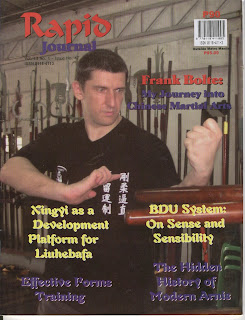 (The Cover Page of the Magazine where this article was originally printed)
Posted by 69buccaneer at 7:13 PM