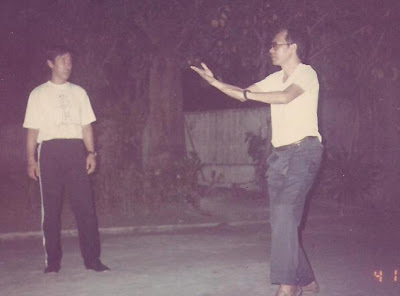 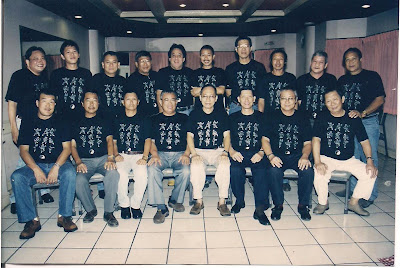 The Tai Chi Circle of Bacolod (TCCB) during its first year anniversary.

The Tai Chi Circle of Bacolod (TCCB), a non-profit, non-competitive network of career professionals/business people dedicated to the serious study of the internal Chinese Martial Art (CMA) "Grand Ultimate Fist," will be turning 10 this coming July 17, 2010, earning for itself the distinction as the oldest recorded existing Tai Chi Chuan group in Bacolod City and Negros Occidental.

The first practitioners of Tai Chi Chuan in Negros were obviously the Chinese who came to the island primarily as merchants and/or laborers. Unfortunately, there are no records of who these individuals were since the Chinese were very secretive, especially with their martial arts. What is known, however, is that early Chinese settlers of Negros, just like most other Chinese migrants in the archipelago, came from Fujian Province, Mainland China and spoke the Hokkien dialect.

Upon the founding of the Wushu Federation of the Philippines (WFP) in Binondo, Manila in the 1980s, Tai Chi Chuan was introdued to the public in a wider scale.

Yap Sifu was among those who learned from Master Li. He was invited by Master Li to his apartment for more concentrated training aside from the regular mass training and did daily training under Master Li. Yap had studied a modified 108 posture form from a local Tai Chi Chuan master in Bacolod prior to studying under Master Li.

In 2000, several Tai Chi Chuan enthusiasts invited Yap to teach them. At first Yap refused because he was just doing Tai Chi for his own health. Later, Yap accepted under the condition that no fees will be collected from the members. Yap Sifu put the group to order and the training started.

Tai Chi Chuan is a manifestation of the equilibrium in the universe through the harmonization of the opposite yet complmentary metaphysical forces Ying and Yang. This flux and continuing harmonization is represented by the circle in Chinese cosmology. Thus, the name Tai Chi Circle of Bacolod (TCCB) is an apt name for a group whose goal is to harmonize and balance their lives.

Although Tai Chi was originally develop[ed as a fighting art, the primary objective of TCCB is self healing by cultivating the mind and inner peace, correct breathing, non-impact/non-injurious physical exercise through the forms, proper diet, and health centered lifestyle. Modern society’s stress-intensive lifestyle is an equally pressing concern. Without health, living becomes uneasy and burdensome.

For Yap Sifu learning is a life long pursuit, especially the study of Tai Chi; You only stop learning when you are dead. TCCB’s focus is primarily on the teachings of the late Grandmaster Cheng Man-Ching.

TCCB members have sworn on the benefits they have reaped from tai Chi training. According to Guillermo "Bill" Gomez, who started martial arts with the hard style of Karate, Tai Chi training has helped him take control of his diabetes. Jose Uy Jr. reports an energetic well being and inner peace inspite of the stresses of work.

During the first decade of the 2000's a few Tai Chi groups have emerged. TCCB, however, distinguishes itself in at least four respects: 1) It is the oldest existing documented group of Tai Chi Chuan practitioners in Bacolod City and Negros; 2) It is the only group in the city and province at this time to practice the classic Cheng Man-Ching 37 postures and the classic Yang Chen-Fu 108 postures, in addition to the Beijing 24 postures; 3) Its System of teaching and training Paradigm is based on scientific and natural principles as opposed to mysticism to help its members comprehend the art faster and clearer; 4) Training is focused on self healing and wellness as opposed to sport competition or fighting; and 5) Free instruction to all those who are interested.

TCCB came to the attention of the public on March 31, 2004 when Atty. Juanito S. Amihan, himself a martial arts enthusiast, hosted Yap Sifu for his TV show Reflections over at Negros Progress Channel. The group’s first public demonstration was during the 2nd Bacolaodiat Celebration last February 27, 2007 at the Bacolod Public Plaza where Humberto “Toti” Lim and Cathy Friend performed the 37 and 27 posture Yang Style Tai Chi Chuan form.

TCCB is greatly indebted to Mr. Mariano Cua who offered his place for the group‘s training. Interested parties may contact Mr. Jose Uy Jr. at 434-7664 or visit during practice every MWF 8:00 P.M. at Oceanlight Import and Export, Magsaysay St., Bacolod City.
Posted by Conceptual Warrior at 7:12 PM