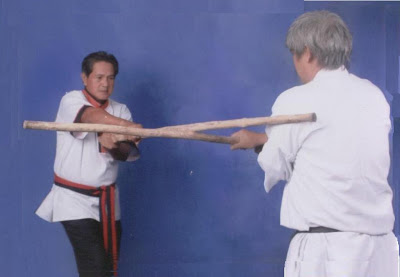 Lobrido started the study of the Filipino Martial Arts (FMA) in 1960, when he was 10 years old. He had four teachers with whom he learned from at about the same time. From Juan aguilar of Panay he learned Solo Baston (Herada Batangueña, Frances, etc.), Doble Baston, Espada y Daga, Pangamut. Teo Aguilar would visit the Lobrido residence every December and stay there for a month. While there he trained the young Lobrido.

Lobrido already studied the Methodo kind of Arnis from his grandfather, Benjamin Baylon of brgy. Ma-ao, Bago City. He learned the 12 strikes, 12 blocks, etc. common in all systems of Arnis.

His third teacher was Agustin Jalandoon, a student of Grandmaster Abraham Gubaton. Jalanddon taught Lobrido's father, Florencio, Lagas, a style of arnis that seems to be the forerunner of Oido de Caburata. The young Lobrido studies with Jalandoon after he is through with the elder Lobrido.

Lobrido's last and most influential teacher was GM Mamar. GM Mamar himself studied different systems of Arnis from four grandmasters. He evolved the Lagas/Oido he learned to come up with his Original Filipino Tapado (OFT). Lobrido started his studies with his uncle in 1960, the same year Tapado was founded. By his early teens, he was already assisting his uncle in teaching students.

As customary in those times, GM Mamar's Original Filipino Tapado (OFT) was put to the test in countless unprotected full contact challenge matches with masters of different styles. GM Mamar remained undefeated up to his death. In several instances, GM Lobrido engaged in these challenge matches in behalf of GM Mamar.

GM Mamar had designated Lobrido the Chief Instructor of his art with the rank of Master even before it was introduced and taught publicly. Upon the founding of the Original Filipino Tapado Long Stick Fighting Association (OFTLSFA), Master Lobrido was officially designated as Chief Instructor and second only to GM Mamar. He taught almost all of the beginning students. It was also common for students to undergo training under the Founder’s cousin Nelson Carmona of Bacolod (now himself a grandmaster) and his relative Joe A. Pamilangco of Bago (Master under GM Mamar).

The Mamar Clan formally turned over the headmastership of Original Filipino Tapado to GM Lobrido, during a simple ceremony at the funeral rites of the late Founder in February 2005 (see turnover pictures at http://oftlsfai.blogspot.com).

GM Lobrido had been featured in the cover page of Rapid Journal, the Philippines’ one and only and longest running martial arts magazine, as well as in articles in several of its issues. He was also featured in a special edition of FMA Digest by Punong Guro Steven K. Dowd of Aguillon Arnis, the official publication of the University of St. La Salle (USLS) The Spectrum, Mag TV na Amiga! at ABS-CBN (two times), and various daily and weekly newspapers in Western Visayas.
Posted by Conceptual Warrior at 7:37 PM